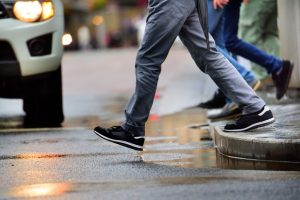 Man stepping over puddle in rain

(May 1, 2022) A man is in critical condition at the hospital after being struck by an intoxicated driver while crossing the street last night, April 31, 2022, as reported by KSAT. Apparently, the man was crossing the street at the 8100 block of Marbach on San Antonio’s West Side, when he was struck by a silver vehicle. He was seriously injured, as reported by the police, and was transported to the hospital in critical condition. However, he was stable as of last night. The driver of the silver vehicle fled the scene and was charged with failure to render aid after he was found near the accident by the police. They also reported that the man appeared to be intoxicated and was also charged with driving while intoxicated.

Early this morning, May 1, 2022, a woman was struck and killed by a vehicle while attempting to cross Interstate 10 on the 9700 block on the West Side. Police reported that a distressed and unclothed woman approached their vehicle while they were parked in a parking lot near an I-10 access road at 1:35 A.M. The officers called for Emergency Medical Services and requested a female officer, but the woman became confrontational when they attempted to render aid. She then fled across the highway when she was fatally struck by an oncoming vehicle, which was unable to avoid her. The driver did not stop to render aid, but no charges are pending at this time.

Striking a pedestrian is a motorist’s worst nightmare. However, it is sometimes unavoidable, and there are steps that every motorist should follow in order to be in compliance with the law. It is important that you know what to do if you accidentally strike a pedestrian with your motor vehicle.

Have you been injured in a pedestrian accident in San Antonio or the surrounding area?